I’m tired of talking about Chick-fil-A. 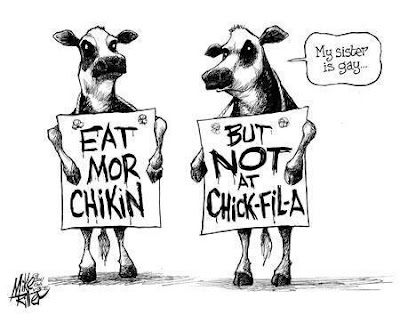 If you look at my Facebook posts over the past few weeks it might seem like I feel otherwise, but I really do want the Chick-fil-A conversation to come to a conclusion. I’m as tired of it as everyone else. But for some reason, we just can’t stop talking about it. We even have people who are complaining about people who are talking about it, and those people are just adding fuel to the fire. This is such a controversial topic that these discussions tend to be more emotional than intellectual. I mean, people are genuinely getting upset. People are fighting, enemies are being made, friends are getting unfriended,

So why can’t we let this go? Well, we are just now learning why memes go viral, so I can only speculate. But clearly, it has a lot to do with the presence of social networks like Facebook and Twitter. If you just look at the visceral nature of these discussions, you might think that Dan Cathy held a press conference to state that his company was going to engage in armed combat with homosexuals. But even his critics should recognize he was only answering questions that were put forth to him. Many people view the criticism as a breach of first amendment rights, while others base their criticism on a breach of basic human rights. But really, this conversation has proven that it’s not so much what people think as much as how they feel about it. That’s why the conversations get so heated. The mind of humanity is busy trying to decide where it stands, and that leaves the soul of humanity embroiled in this internal moral struggle.

Even though the discussions are extremely vitriolic, I do think it’s a good thing we’re finally having them in public. I mean, many of the people I’ve spoken to on this issue are relatively unknown to me. That sets up a situation where people are either very civil or downright antagonistic. And since we’re evolving socially, you see fewer and fewer people needlessly insulting each other. People are being forced to stop and think about this stuff, and it’s driving some people crazy.

Even those that don’t give a damn about it are having to deal with it. And honestly, I hope it does annoy people. This “meh…politics” attitude is how we ended up in the mess we’re in today. It got us into the Iraq war, which cost trillions of dollars and over 130,000 human lives. It plunged us into massive debt by allowing people to gamble with the nation’s economy. It allowed jobs to be outsourced while cutting critical programs at home. It neglected our education, our health, the health of our environment, and so on. We can blame the Republicans or the Democrats all we want, but we the people are ultimately to blame.

You don’t have to be a Republican to see that people’s first amendment rights are being protected, and you don’t have to be a Democrat to see how people’s human rights are being denied. The left and the right will always be at odds, especially if we oversimplify every debate into two sides. Really, it’s the people in the middle (including those who try to stay out of the discussion) that make all the difference. Only about half of all voters turnout for presidential elections, and only about a third turnout for congressional elections. That means a minority of Americans usually decide the leadership for the nation, and the majority just lets them do it then complains about it later. One of the only things on which George Carlin and I disagree is

target=”_blank”>his view that staying out of politics absolves you of any responsibility later on. Well, that’s just idiotic. You’re a part of this society whether you’re an active participant or not. Choosing not to take part in the discussion is still a choice, just like choosing not to vote is still a vote.

If you’ve eaten at Chick-fil-A with the intention of supporting their stance on gay marriage, then I genuinely commend you for sticking to your principles and voting with your wallet. There is hardly anything more capitalistic or democratic. Having said that, I want you to know that I also condemn you in the strongest possible terms for supporting discrimination and misunderstanding the issue. This never was about chicken, religion, or the first amendment. You’re free to believe whatever you want and to donate to whatever causes you support, but your beliefs do not empower you to infringe upon the basic human rights of others.

If you’re tired of talking about Chick-fil-A, then just stop doing it. Stop bringing it up, stop complaining about it, and stop bitching at the people who are talking about it. But if you think that avoiding the issue is going to make the whole issue of gay marriage go away, then you’re just fooling yourself. There are generations of discrimination to account for, and claiming that you don’t care and/or hiding behind your religion isn’t going to resolve the issue. The next time something like this happens (and it will…very soon) we should all remember this debate. You can’t sweep these things under the rug anymore. The Internet has given new life to these discussions, and people like us will continue to have them. It’s your choice whether you want to join in the discussion or let us do the thinking for you.