This video is very much a work in progress. The only footage available to me when I made was three of the trailers released over the past couple of years. A friend is currently capturing high-quality video for me, which I’ll use to continue improving upon this version. Aside from it simply being higher resolution, it’ll have a lot more options for me to tell the story. 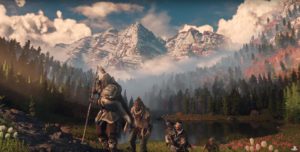 I’ve been looking for a video to set to this song for more than a year, but I wasn’t able to find the right one until now. I’m still on the fence about whether it works, but I have a feeling another injection of new imagery could make this video all I hope it can be. “Victory” is currently the most popular song on YouTube by Two Steps from Hell. It has over 12 million views on the official video, and countless re-uploads and remixes like mine. I wanted to make my version unique, so I remixed not just the video but the audio as well. 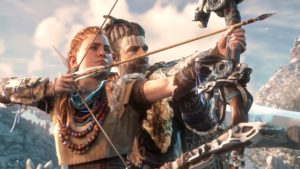 The video starts with the orchestral version of “Victory,” highlighting Horizon Zero Dawn‘s beautiful and mysterious past. Then it shifts into the more familiar instrumental version as human beings are introduced, traveling from far off lands to find what remains of civilization. Once we are introduced to our main character, we finally hear the main theme of the song as it shows her growing up and practicing her archery. As she and her skills take center stage, it shifts into the full version with choir and lead vocalist. The song naturally dips into a mostly orchestral section as we begin to see her actual story unfolding, with a mysterious journey across the machine-filled plains and ancient ruins. Finally, the song drops into a powerful reprisal of the orchestral version, the section of music that inspired this whole project. 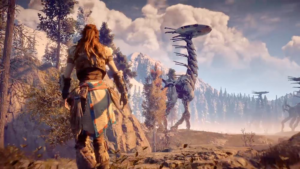 I became obsessed with that part of the orchestral version while on a very long drive across Texas. The whole song is just so well written and performed with such intensity that I couldn’t stop listening to all three versions over and over. And it was during one of those listens that I heard the orchestral “break down” and knew what I had to try as soon as I got to my computer. The result is the video above, which I will continue to work on until I’m no longer inspired.

I’m the reason for all of this. They call me a killer, a monster, a terrorist. I’m all of these things.

This was an exercise in immediacy. Some videos take me several hours, some take many days, and some take weeks. This one only took a few hours. Two Steps from Hell uploaded this song to their channel today, so I wanted to ride the wave. And though there are obviously things I want to change, the challenge was putting together a video I could feel comfortable releasing before the day was over.

Promise: The Last Day of War

The only unbreakable promise of war is that one day it will end.

I truly love this one. The music is uplifting and hopeful even though the video doesn’t appear to be. But this isn’t a celebration of the death of humanity as much as the rebirth of the old world, fulfilling the promise that war will one day end. Our machines will continue to plod along until there’s no one around to maintain them, and nature will move on as though we never existed. Admittedly, this could be viewed as a depressing reality, but it’s no more depressing than the cost of war.

Every aspect of human technology has a dark side, including the bow and arrow.

I mixed this together last night. Some videos and songs seem like they were meant for each other, and these two definitely fall into that category. The story mostly takes place outside of a city that resembles a futuristic Las Vegas, so visually it’s very tied to the name of the song. And thematically, it has a somber melody that suits the protagonist’s journey, which unravels itself a little at a time. The video itself even takes center stage during an unusually repetitive and otherwise boring moment in the song. It’s as if they composed it for this video, though they clearly didn’t.

Before she became a tomb raider, Lara Croft had to learn how to survive. This short but compelling vignette is based on the trailer for 2013 game Tomb Raider and features music by Two Steps from Hell.

This version is the first draft, so it’s not quite perfect yet. I need to finish putting the musical credits into the scene and remove the artifacts from the optical flow filter.

Audio: “His Brightest Star Was You” by Two Steps from Hell from the album Vanquish

Two Steps from Hell recently released another album, and it continues the tradition of truly magnificent scores of the past several years. Though the album landed in the final month of 2016, I’d say that “High C’s” is probably the lead contender for song of the year. But more on that later. For now, take a couple minutes to experience one woman’s struggle to fight back her almost literal demons. I set this short trailer from Ninja Theory’s Hellblade to Two Steps from Hell’s “Inferni” from their new album, Vanquish.

“Before Time” by Thomas Bergersen + Diablo III: Reaper of Souls

Even in the heart of heaven,
angels can still feel fear.

This is a short film about the power of love and power itself, set in a galaxy far, far away. It is arguably one of the best stories in the entire Star Wars universe, and it only takes seven minutes to tell.

This is a “mashterpiece” of the cinematic trailer for the Knights of the Eternal Throne expansion to Star Wars: The Old Republic and the song “Illusions” by Thomas J. Bergersen. After a bit of tweaking, I realized that the two pieces just belonged together. It is currently my most popular video on YouTube with almost 1.5 million views as of this writing.

A story like Romeo and Juliet, except they kill anyone standing in their way. I’ve been a fan of the Assassin’s Creed series for a long time, though I didn’t actually play them until the third or fourth had been released. After hearing Patrice Desiléts give his account of the franchise’s birth, I love the series even more.

Flight of the Guardians

Prepare to fall out of the sky. The opening cinematic to Halo 5 Guardians is one of the most intense beginnings I’ve seen in video game, and “Flight of the Silverbird” by Two Steps from Hell feels like it was written for it. The slow opening allows for light dialogue to set the stage, then the music builds to match their flight, the battle, and their escape. Out of all the things I’ve edited, this is definitely one of my favorites, and it’s currently my most popular video on YouTube.