Felicia Day and Wil Wheaton walk into an elevator…

Late last night, after day two of the Origins Game Fair, I was taking the elevator back up to my room, and in walked a few people along with Wil Wheaton and Felicia Day. I wanted to chat with them so badly, but they are celebrities and were in mid-conversation. I figured they would be annoyed by yet another fanboy interrupting their night, so I decided to politely keep my mouth shut. You can only imagine how hard it was for me to sit there silently because I’d been wanting to chat them up all day. Wil has become one of my favorite human beings because of his entertaining and heartfelt posts on Facebook, and my crush on Felicia probably borders on mental illness.

From the moment they walked into the elevator Wil was talking about this project he was going to be involved in, but he wasn’t allowed to talk about the details due to a non-disclosure agreement. He kept bringing it up, mostly to spare everyone from the dreaded awkward silence. Felicia just kept playing on her phone. I just stood there quietly.

As the elevator continued its annoyingly-fast ascent, people kept getting out. When we reached Felicia’s floor she missed the chance to leave because she was busy playing with her phone. Wil teased her by yelling, “Fail!” And I said a humble prayer of thanks to the geek gods.

Eventually, everyone left the elevator except the three of us. Wil continued to talk about that thing he couldn’t talk about, and that’s when I finally chimed in. I sardonically reassured him that he could talk freely because I wouldn’t tell.

Felicia then said, “Liar! You’re a lying liar. I can tell.”

And that’s how I met your mother.

Anyway, my stop was next, so I begrudgingly started to leave. On the way out I turned to them and said something about how it was really cool to hang out with them, if only for a moment.

As the doors closed behind me I heard her yelling, “Oh my God! He farted! That guy totally just farted!”

I got on an elevator earlier today… 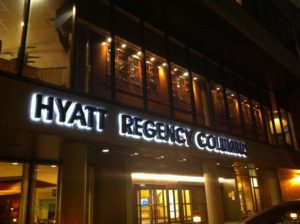 I got on an elevator earlier today with a bunch of total strangers. One of them, a friendly kid with big hair and small jeans, looked at the ornate floor and said, “Ooh, it’s like a club. If only we had some fancy lights.” I turned on an strobe light cell phone app, and he began to dance. A woman beside me asked, “Why do you have something like that?” I nodded at the kid and said, “Because of things like that.”

50 Fun Things to Do in an Elevator