“Probably Not the Greatest Story Ever Told” 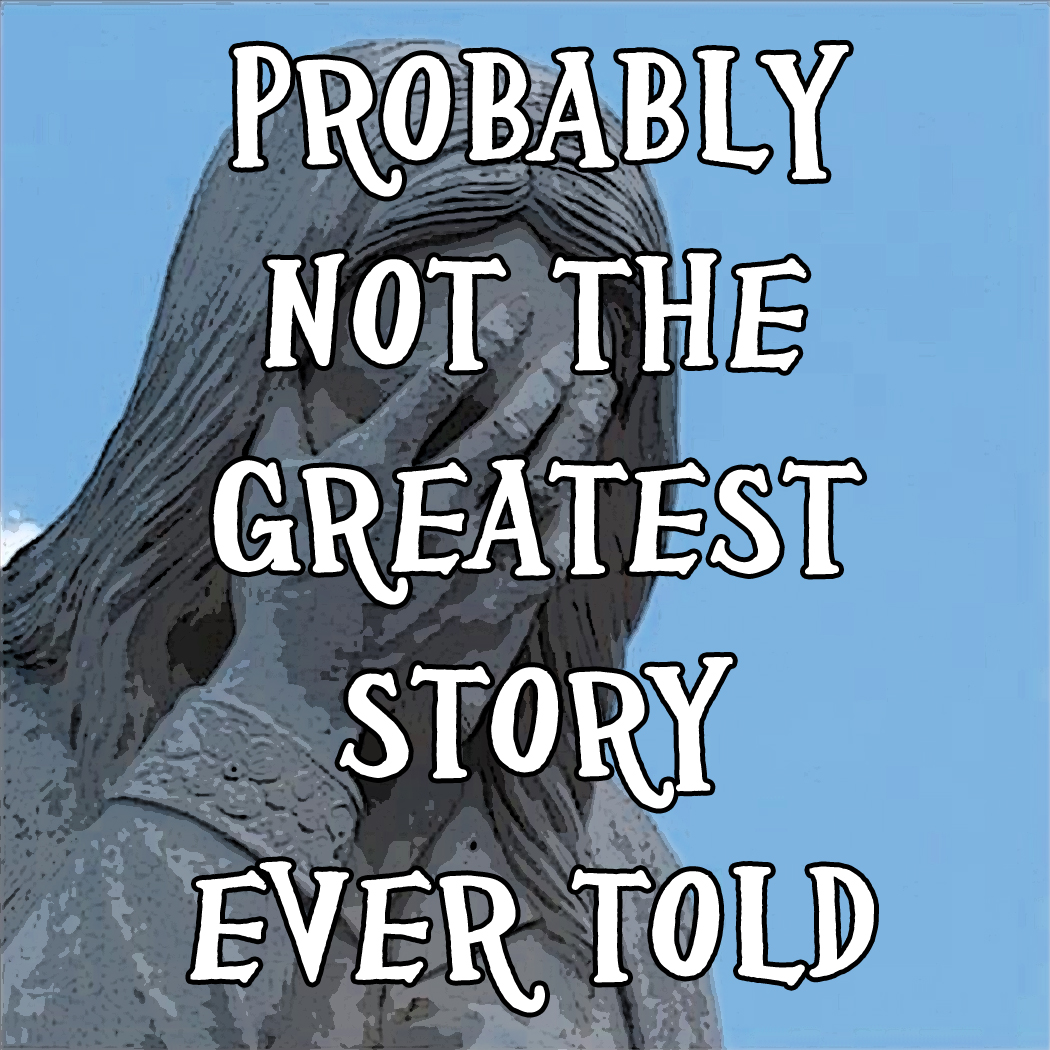 The last line of this story is: “Damn, I look good in a loin cloth.” That has nothing to do with the story, so it really don’t matter. I just wanted to ruin the ending for you. I have no shoes on right now because I’m sitting at my desk with my shoes off. This story has already started, so let’s tune in and see what we founded…

I was walking down the street and saw this guy and he was really neat, so I stopped and talked to him, but he would not talk to me because he was in a bad mood and probably didn’t want to be talked to. So, I talked to him anyway and it was nice. At first he just ignored me but then he started getting slightly annoyeded and then he got really annoyeded and eventually started telling me stuff like, “Go away” and “Go away NOW!” and “Why are you still here? I have a gun.”

I really didn’t know what to do about it so I tried to hug him. He didn’t not like that much, and I figgered it would just take some time so I kept holding onto his arms and shoulders until he starts to scream. I finally realized the problem after that: he was lonely and stupid and probably a communist. So I followed him around and always aimed at acquiring an all-encompassing attention. It didn’t work, so I started a fan club.

It was not a success, and neither is the tofu. I wasn’t sure what to do, so it became earlier. After it all started to make sense, it turned around. I was sure glad about that because my feet were beginning to hurt. Finally, the guy with the dip in his lip started to trip. It was a good thought, if you acquire my drift.

So I moved back to Montana where it was quiet and not loud and started me up a dental floss factory. I didn’t need to not get some uncorrecting undone, but now was not the time to do it (not). The door closed on me back in England, so I opened a window. Now do you see what I’m saying? All signs point to different points.

Here ain’t the grammar section of this epic…nay, this classic! The football was passed by the quarterback. Where have all the old school grammar rules gone to? Can a sentence not be calculated unlike an equation? Are worsely-formed sentences we ask people worser if they don’t require an answer? I read somewheres that writers should eschew obfuscation, but I never looked the phrase up; I’ve been too assiduously engaged in utilizing my thesaurus.

“Whatchoo readin’ for?” she axed.

“Eventually, the world sought out not only the gay community, but also those who were heterosexual and infected. Now it did not matter if you were gay or straight, if you had the disease, you deserved to die. Extreme prejudice and fear swept through the world as those infected, or assumed infected, were being charged, prosecuted, and convicted for the spread of a disease. The terms ‘slut’ and ‘whore’ were no longer looked down upon with shame, they were looked down upon with hate and prejudice. Prostitution, ‘the world’s oldest profession,’ had become ‘the world’s deadliest profession.’ Street corners that were littered with prostitutes for so long were now abandoned.”

So, this is not a good time for stopping, because we always keep going. I hit the gas. My friend told me I shouldn’t huff gasoline, but what can you say? WHAT CAN YOU SAY?! I know this much; at least an ape couldn’t write this. Or shouldn’t, anyway. Sure, if you gave him an infinity amounts of time, chances are he (or she) could do it, but would you want to read it when he (or she) was through? Chances are, that might could be an likely unpossibility.

So, then there was this guy who wanted to meet me, but I didn’t want to meet him, so we didn’t meet until we finally met. He was cool, but he didn’t like it when it was hot. I was outta there. He is asleep now, but soon a noise will wake him. The sound could have been a natural occurrence, but this one was not. The Author made this happen, to get his attention. He awaked with a stop.

Someone around him be yelling, and they not be happy. Almost immediately, he notices things ain’t the way they shoulda be. He looked around the room for a clue to his whereisheabouts, and then he looked in the bed beside him. A lass, with cornstalk blonde hair, whiched flowed all over the sheets like a cart of straw that has hit a midget and poured its contents into a ditch, was asleep next to him. He leaned in and moved her hair like a ninja stealing lumber, and jumped back as though she bit him. Oh, [insert your favorite expletive]! It was his brother’s wife, practically his sister. Yikes and gross. He scrambled out of bed like eggs, suddenly aware of the owner of the voice yelling things about smashing people in the hallway. As soon as he was out of the bed, he became aware of his nakedness. What did I do? he asked himself. Well, duh. What a idiot.

after the plane hit the ground i was sure we were dead. we were, of course, which makes my sureness so surely correctly. the ground was quakin’, the earth was shakin’, and the floor beneath our feet was moving back and forth in a violent motion. it was electrifyingly and excitingly expected. and then, laughing his ass off, covered in his own pee and puke and stuck behind the wheel of a speeding vehicle there was nothing he could but laugh. both of them did as did several of the people on the bus in front of them that drove near where there were but not too near like ahead of them in the same direction as them

Ayotoyamaguchimotosuzuki looked to Cletus who nodded hard twice and then chunked the flizashbizang. It hit him some dude on the foot, and he jumped back from it, grabbing for what Cletus assumed would be a gun or a knife or a gun. He wasted no time. There was a loud explosion and the bright flash stunned the burly, bonafide bodyguard. Cletus was on him in an instant (not like that!), slashing his throat with his blade. He made a totally gross gurgling sound and he fell to the ground and before his body hit, Ayotoyamaguchimotosuzuki had the woman subdued on the ground. It was so cool. You had to be there, I guess.

We open our story with a man on horseback, both dead, of course. Their carcasses turning leathery in the sun, they have somehow avoided the scavengers. This is very good for them because they are carrying $1.3million in gold. Traveller, the leather-bound mare, seems plastered in place by the heavy metal. Which reminds me, it was a damn shame that Great White lost all 96 of its fans in that fire.

And here is the best part of the story. It’s why I named it what I did. What it? You know…this it. The thing you’re reading. Yeah. Should I go back to the story now? Okay.

But, I had to put a paragraph break in before I do. This was the event that would decide the fate of the world. On one side of the massive valley stood the armies of good, headed by the Son of God, this army of faithful believers and archangels stand poised on the edge of destiny’s cliff. The very revered glory of the man, Jesus, seems to flow through the loyal subjects and other groupies. Hatefool, on the “other” side of the valley, lurks the really big and scary armies of evility, headed by the man that has been prophesized by many who have seen his coming. I hope you guessed his name. That’s right. The one…the only, the Antichrist. The Antichrist. Capital T, capital A. We’ll call him T&A, for short. Anywho, he calls out to his subjects and demands they fight a war in his name against tyranny and hypocrisy. The sky has became blood red from the preceding nuclear explosions that devastated the planet from the part of the story I didn’t write ‘cause I didn’t want to bore you. Those peoples who did not die from the Iraq war stand ready to fight now, in this, the Valley of Judgmentations.

Then there was this guy named Jesus, and he told people he was the son of God. Of course, he wasn’t the first, but for some reason his good looks and killer personality got him crucified and sanctified and deified and other –fieds, I’m sure. Anywho, here we are a couple thousand years later, and this guy is still hanging on crosses, looking quite miserable I might add. Something makes me wonder what he will say when he comes back and sees terribly miserable pictures and statues of himself, hanging by nails and mostly-naked. Probably, “Damn, I look good in a loin cloth!”

I loved this assignment because I was told to “write the worst, horriblest story you can.” I’m sure it could’ve been worse, but I wanted to make sure someone could enjoy it if they tried to read it. Though I’m sure I missed a few rules, I tried to break every one I could think of, including (but not limited to) grammar, spelling, spoilers, coherency, consistency, honesty, blasphemy, and decency. How many can you find?