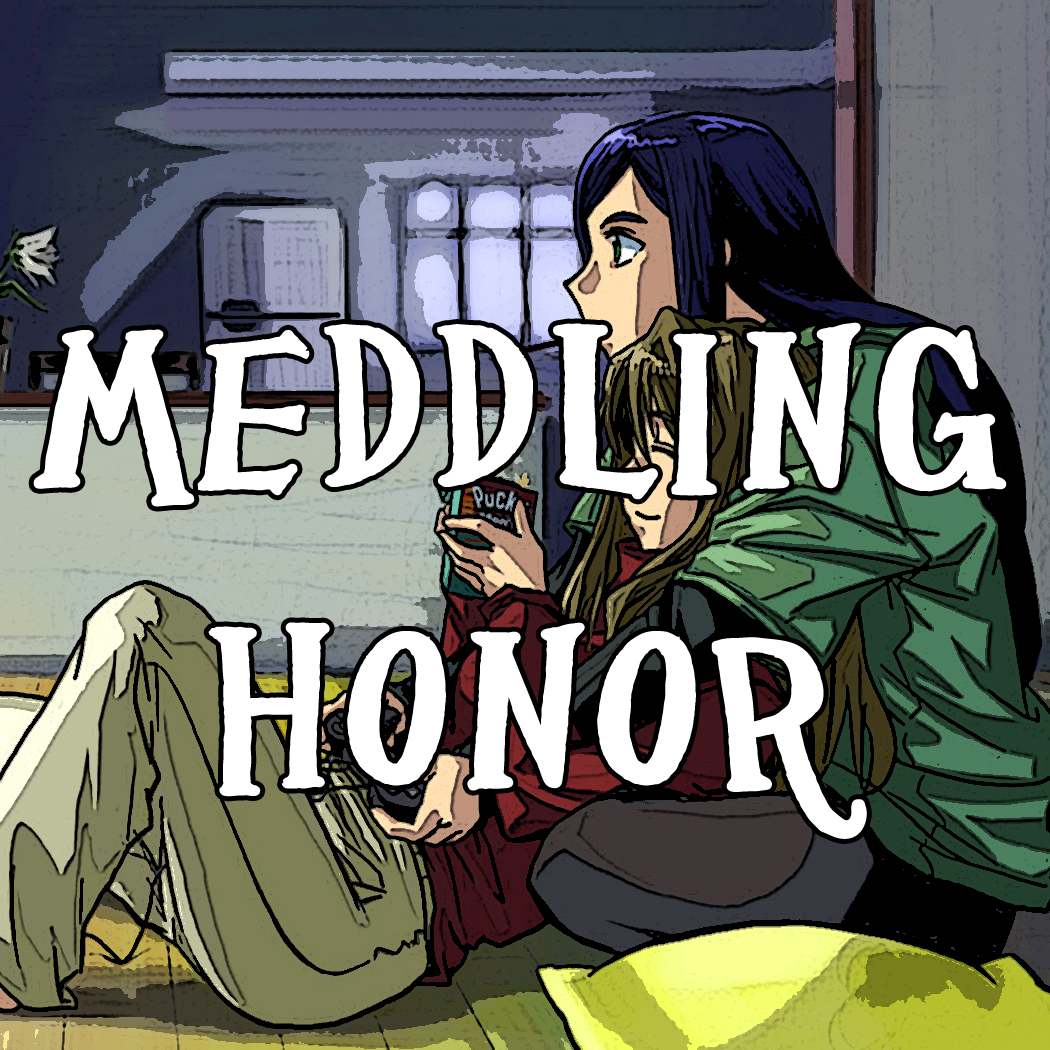 Shoot!
I am.
Duck!
Shut up.
The Nazis are gonna get you.
They just did, no thanks to you.
Yay! My turn.
Hang on. I’m going to try it again.
Again? You just died.
Well, of course I just died. I couldn’t concentrate with you distracting me like that.
It’s not my fault you suck.
I don’t suck. I’ve just never played this level before.
You played it all last night! C’mon…let me have the remote.
One more try.
Okay. But, as soon as you die, it’s my turn.
Sure.
Hey, Teona.
Oh, hey Teona. I didn’t hear you come in.
Hey y’all. What’re ya playin’? Oh, Medal of Honor. This is such a cool game.
Yeah, and it’d be even cooler if he’d let someone else play.
Are you hoggin’ the game again, Carl?
Nah, Anna’s just whining because I want to try this level again.
Again? You’ve already tried a dozen times.
A dozen times? Don’t exaggerate.
Well, close enough. He wants to try until he gets it right, but he won’t even let anyone else try until he has it down perfectly.
Oh, hush. These things take time.
Yeah, you definitely take time…slowpoke.
Watch out, Anna. He’s the one with the sniper rifle.
Yeah. Watch it, Babe.
Let’s see how well you play if I unplug the remote.
No, wait!
Don’t worry. I’m not gonna.
That would not be cool.
Carl’s right. It wouldn’t be cool. But, it’d be funny.
Funny for you two, maybe. You’re not playing.
And we probably never will.
Relax, Anna. Just one more time, and you can have it.
Yeah, okay. Then I’m gonna play until my hands get tired.
Aw, you can’t do that.
And, why not?
Because.
Astute answer.
Are y’all gonna argue all day?
Not if he gives me the remote.
I’ll give you the controller after this turn, I already told you. But not until I—aw, damnit!
Woo-hoo! It’s my turn now. Hand it over, sucka.
Damn.
Don’t worry ‘bout it, Carl. You’ll have plenty of chances to play. You own it, right?
No, we rented it. And it’s due back tomorrow.
Oh.
Yeah, and he’s been playing it the whole time. This is only the second time I’ve touched the remote since we rented it.
I kept asking if you wanted to play, but you just wanted to watch.
I do like watching, but not the whole time.
So, is it always like this with you two?
You mean with video games?
Yeah. Who plays the most?
Carl.
Me.
Well, at least you two agree on something.
We agree on a lot of things, actually. Anna’s just irritable right now.
I am not.
You are. Grenade!
Ah!
Dead. Is it my turn now?
Nope. I’m going again.
Thought so. But, really, we agree on a lot of stuff. She just hasn’t eaten in a while, so she’s grumpy.
Grumpy? You play this game all week, and when I want to play one game, I’m grumpy?
No, you just get irritable when you’re hungry.
Whatever.
I do too, Anna. Don’t let him get ya down.
I’m not. I’ll just kill a few more Nazi’s…ahh, I feel better already.
Kill them Germans!
Nazis.
Sorry…Nazis.
Yeah, not all Germans were Nazis.
Yeah, sorry. Aren’t you German, Carl?
Well, sort of. I’m a fourth or fifth generation American. So, I’m a mutt more than a German.
But, I love ya anyway.
Thanks, Babe. Sniper!
Ah! Where is he?
Up there on the tower. You almost died.
Almost. Damn Nazis.
This really is a cool game.
Yeah, I’ve already decided—turn around!
Ah! Dang.
Is it my turn now?
Not yet.
You said you already decided…?
Oh yeah. I decided yesterday to buy it. This is definitely a keeper.
Great, then you two can play it whenever ya want.
Whenever he wants.
It has a multi-player section, Anna. We can all play it whenever you want.
Multi-player? Hey, y’all didn’t mention that. Why aren’t all three of us playing?
‘Cause we don’t have enough remotes.
Yes we do.
We do?
Yeah. I have two more out in my car. I’ll go get them.
Cool. I’ll just stay here and watch your girlfriend slaughter the Nazis.
Sounds pleasant. Don’t talk about me while I’m gone.
We won’t.
So, has he really been hoggin’ the game?
Nah. I’m just messin’ with him. I’m not very good, anyway. Ah! Where’d that come from?
From that far right corner, I think.
Great. Too late now. See? I’m not too good, but it’s fun to watch.
Looks like it.
It is…especially the multiplayer. You’ll like it.
I’m not very good, either. I don’t know if I’ll like it too much.
You will. Trust me.
Hey, look. I found three controllers. Maybe we should invite Ray over to play.
Good idea.
Did you die yet, Anna?
Nope. I’m invincible. Damn!
Aw, shucks. You died. Multiplayer time!
Okay, fine. Plug ’em in and let’s start killing each other.
What a strange phrase to say so lightheartedly.
Yeah, I love video games.
Ditto.

For this assignment, we were supposed to have a three-person dialogue about video games without using quotes or identifying markers. For anyone who’s curious, the game they are playing came out shortly before I wrote this piece, and I spent a lot of time happily killing Nazi soldiers. So, when this assignment came up it was a no-brainer.