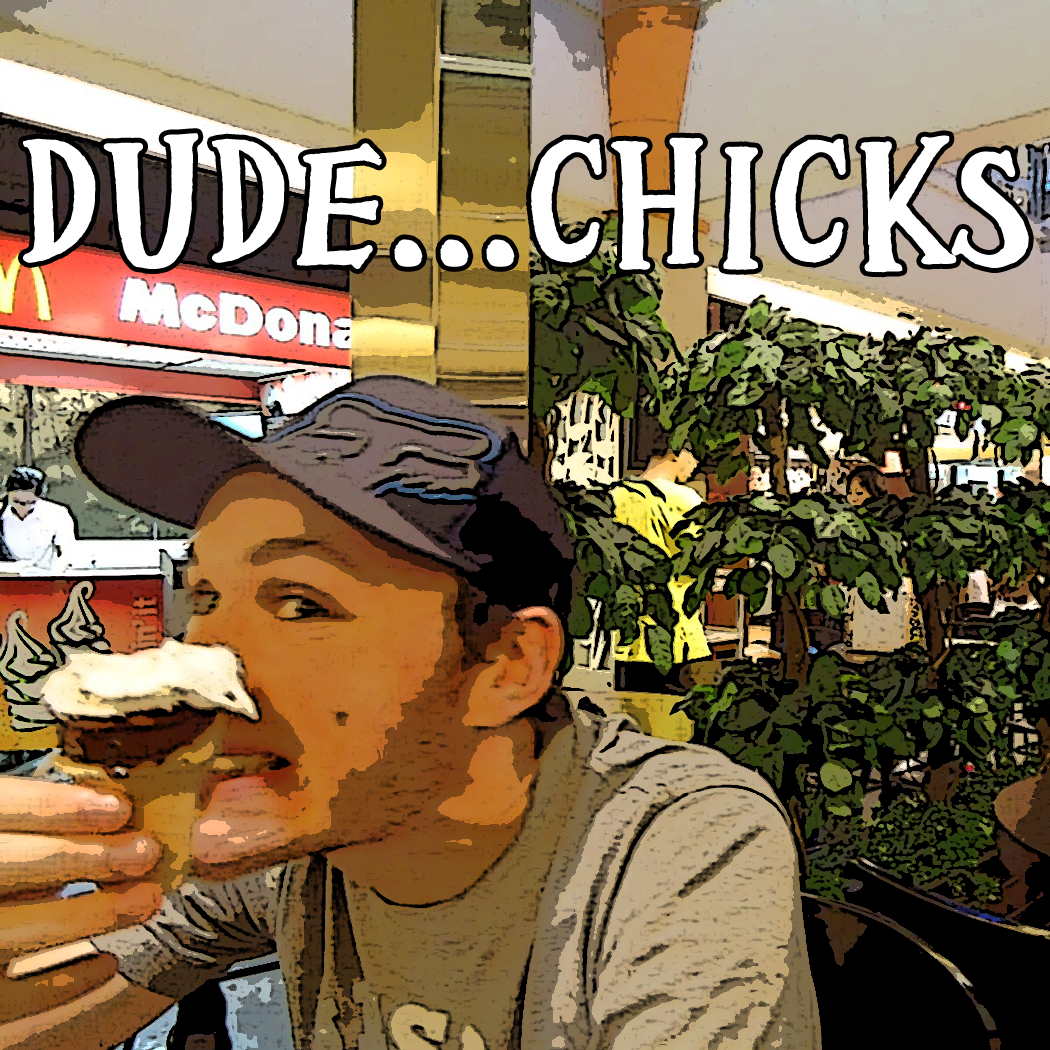 The food court is busy today, thinks the young male. He looks at his watch: 11:54. Just about lunchtime. He is seated comfortably in an uncomfortable chair, working through a McDonald’s #1 value meal. Whatever value they have, says the cynic inside him. The crowds that flow by seem unconcerned with him. They are too busy deciding what restaurant to frequent and what stores they want to browse. He too is busy choking down the remnants of his Big Mac.

A group of teenage girls bounce into their seats not too far from him. Their high-pitched voices echo throughout the food court. He is no older than they are. Well, not old enough to matter, he thinks. From across the distance, he tries to nonchalantly check the girls out. He feels somewhat guilty staring them down in a public place, almost like a dirty old man. He cleans his hands with the sandpaper napkin, attempting to be more casual, and leans back in his seat for the first time since he got there.

“Hard ass seats,” he says, complaining to no one in particular. He sips his Sprite slowly, scanning the throngs of people passing by, but his real attention remains on the girls. Mmm, she’s a hottie, he thinks about one in particular.

The one he decided was the cutest (and, coincidentally, probably the oldest) has blonde hair and a tan that is a cross between cinnamon and citrus. Her flat, straw-colored hair dances about her shoulders, distracting him like a donkey with a carrot. It reacts to her every movement, to every movement the other girls make, and to the natural currents from the rush of people. It flows like it’s alive, mesmerizing him. He had no idea how long he had been staring at her before he realizes she is looking at him. Shit, he almost says aloud.

He doesn’t even have to think about it. Ancient habits make him lose eye contact too soon. Before it’d begun, really. Throwing a hand to brush the side of his head, he preens himself unconsciously. He examines himself carefully. He notices a piece of sauce-covered lettuce that has smeared a trail down his shirt. What a moron, he thinks. Scolding himself for what he perceives as stupidity, he casually reaches down. He flicks the intruding piece of vegetable off his shirt and wipes the wet spot with a cardboard-soft napkin. Continuing to examine himself, he notices something.

“The fuh–,” he breathes, silencing himself. You’re kidding! He is wearing two different shoes. And not only that, they are two completely different colors. A cold chill of embarrassment begins to coat him as his mind returns to the blonde girl. Damn, he thinks. She is looking at him and smiling. Probably just a joke her girlie friends said, he assures himself. But, she is looking at me. He stretches his cheeks into an obligatory smile.

He crosses his legs, tucking one leg under the other, and tries to act casual. He assumes the blonde girl, to whom so much of his emotional energy has been focused, would soon catch on to the fashion faux pas. If she notices an imperfection, he thinks, that will be it. High school chicks are weird like that. He had assumed that high school girls were a thing of the past, like pop music and superstition. They were mostly too young to mess with, he would tell himself. Too damn superficial.

Suddenly he wonders why he cared what they thought. He was, after all, a college man with college concerns. I bet they’ve never even been to a Delta Iota Kappa mixer. Realizing that he is a bit older suddenly gives him a boost of confidence.

Surely they will leave soon, he thinks. Another girl sits down at their table with a bag full of food and starts distributing the contents. Okay, he realizes, they aren’t going to leave soon. He starts looking for a way out of there without walking right by the girls. He could not stay much longer. No more food.

So, thinking that he is Mr. College Guy, he decides to say “what-ev-errr,” and walk right by them. Maybe they’ll think mismatched shoes are new college fashion statement, fresh off the campus and into their mall. He gets up, throws away his food, and heads for the exit. Before he reaches the table, the blonde girl has already made eye contact with him. She smiles pleasantly, beautifully. Exuding his best college persona, he breaks eye contact with her and attempts to confidently strut by the foursome. He passes right by them, noticing how quiet they are when he does. Maybe he wowed them with his brazen collegiate confidence, or his dashing good looks, or maybe–

Was that a giggle? He thinks one of them did. It looked like a laugh. Why are they laughing? Was it the way he was walking? Maybe they were too immature for the College Man. It’s the shoes he thinks. It must be the shoes. He is devastated, but in the middle of his stuff-strutting stride. He just keeps walking right by the girls, out the restaurant, and right out of the mall. Dude, he thinks as he is going to his car, high school chicks worry about the weirdest things.

For this assignment, we were supposed to write from the perspective of someone who is wearing two different shoes and suddenly realizes it. They were also supposed to think that everyone noticed, and that immediately made me think the character would kind of freak out about it. My only fears with this story are that someone might completely miss the irony or in some way think it’s biographical. But like, I swear I’m not, like, represented in that story. Like, no way dude.