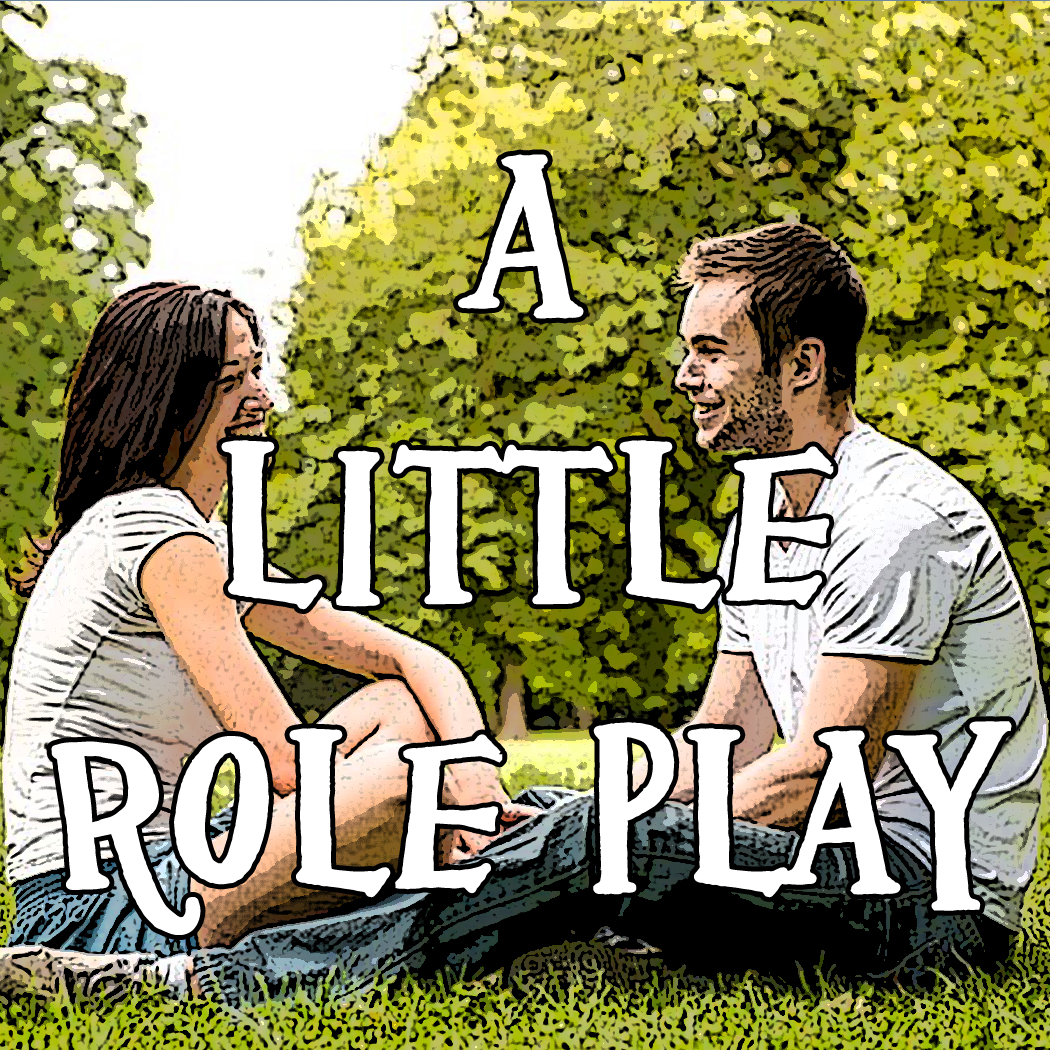 “You know, you aren’t exactly the man I’d hope you’d be. Don’t get me wrong. I love you, and you’re more than I could have hoped for, but you’re always making me do something rather than doing it yourself. I guess that’s pretty typical of a man, but you are not a typical man. When it comes to dealing with people, you wimp out and leave the tough stuff to me. I don’t want to be the helpless little lady, but sometimes I wish you weren’t such a weenie.”

“I am fully aware of my…aversion. It never seemed to be a problem until now. Honestly, I wonder why you are even complaining. I would like to think we are a fairly progressive couple, and we try to keep our gender roles limited. We play our parts, but usually when necessity or cliché demand it. You are the helpless little lady whenever you are being a wimp, and I am the burly big man when you are being a wimp. Otherwise, we are pretty much on the same plane.”

“I realize all of that. But, don’t you think that perhaps we should, if only on occasion, play our parts? We are, after all, a male and a female. There’s no denying that in our society we have parts to play. And honestly, I feel like I need a man, sometimes. But, don’t get me wrong. You know what I mean.”

“I understand, Honey. I am simply not man enough for you.”

“No, Babe! That’s not what I’m saying, and you know that. You’re plenty of man for me. It’s just that you’re not much of a man.”

“Oh, hush. That’s not what I meant, and you know it. It’s just that there are times when it would be good to have a big, gruff, manly-man hanging around.”

“Like when you want to open a jar, or hang a picture on the wall, or hook up the DVD player…”

“I could do all of that stuff if I wanted. It’s just easier to make you do it.”

“Oh, great. Now I feel exploited. You just have me around to do the hard labor.”

“Sexism is a bitch, Baby. Besides, I don’t think you mind.”

“Of course I don’t mind. I think it’s funny that you refuse to strain to open a jar, or freak out when an electrical device needs hooking up. It’s like you want to play the part of the delicate flower, which is fine, my delicate little flower.”

“See, this is one of those good moments where it feels good to be the girl you’re treating so sweetly. Sometimes I’ve gotta be around that maleness.”

“I think that is why we spend so much time with my friends.”

“What does that mean?”

“I just feel like we spend an unusually large portion of our time with my friends simply because we need it. By exposing ourselves (in your case, literally) to all the beer, the cigarettes, the bars, the football, we get our weekly testosterone injection. Since I’m not overflowing with manly juices our little couple seems to thirst for it. Sometimes even I thirst for it.”

“Okay, Mr. Biochemicals. Does our little couple suffer from too much estrogen, too?”

“I didn’t say we suffered, but to answer your question, I don’t think we experience too much estrogen, either. I mean, we experience our fair share of girlie things. With all the makeup, perfume, clothes, and chick flicks, we get our weekly estrogen bath by simply hanging around your apartment.”

“Yeah, even I can’t stick around there too long.”

“That is, I believe, because you are a female, but you are not a typical chick.”

“And you aren’t a typical dude. But, I like that about us, though. Girls en masse drive me nuts. You can almost smell the estrogen.”

“Or the testosterone. Guys en masse drive everyone crazy. Where do you think riots and wars come from? Do you really think women sit around waiting for the next brawl to erupt? You females should actually feel proud of the fact that your half of the species has contributed next to nothing of the death and destruction that my half has. So, do you think I need to improve my manliness? Do ya, woman?”

“Well, I don’t really think it’d be possible to consider it an improvement even if you did, but I appreciate the offer. Calling me woman isn’t as bad as you try to make it. Don’t I call you man all the time? Actually, I like that we consider each other equals in virtually all respects, but that doesn’t take away from the fact that you are a tad bit taller and tiny bit stronger than I am. That comes in handy. Not often, but it does happen.”

“What about the sex?”

“Encouraging answer, Sweetness. You sure know how to make me feel confident about our relationship. So tell me, and I mean seriously, do you want me to be more of a man in bed? I could start pulling and tugging and demanding you do this and that. Would it be more exciting for you if I did?”

“I’m not sure. And, anyway, what happened to seriously?”

“But that is how a man is supposed to act, is it not?”

“How is that sexist?”

“Traditionally, I would have to say yes. But things have changed. Or, they’re beginning to, anyway…”

“Yep. Sexual equality has made its way into the bedroom.”

“Not quite. What I meant is that for some couples role-playing is not just something you do with a pink tutu and handcuffs. There are proper roles that we each must play in order to fit in with the status quo. Normal roles, the kind that normal people feel comfortable giving into. Like, you having a beer and me getting my hair done. If you don’t think roles are important, just stop and think about actually reversing our roles in bed. What does that do to your masculinity?”

“Is it getting dark in here? It’s sort of hard to breathe now.”

“Cute. So, you do get my point. See, there are moments when our roles are important to us, even if we hate to deny it. I have to play the little lady but it’s usually to sucker you into something. You use the big man routine, too, to sucker me into…stuff.”

“Would that make you happy?”

“Then don’t. Do what we’ve always done.”

“But, Babelicious, you were saying that you wished I were more of a man.”

“That’s not what I said. This conversation didn’t start with sex, so let’s not end it there. I just said that sometimes I wish you weren’t such a weenie. It had nothing to do with sex. Gee, I wonder how we got onto that subject…”

“Right. Anyway, what I meant was you’re not a pansy per se, but there are far too many times when I’m the one who has to speak up. It’s like you’re afraid to talk to some people. In some circles, that’d get ya flogged, ya wimp.”

“Sometimes I wish you weren’t such a wimp, either. But you can’t help it. You’re just a wee little lass. Right?”

“Here, take this napkin. You have sarcasm all over you. Look, I know you want to be the sorority sweetheart even less than I want to be the big man on campus. It just seems silly to devote so much energy to something based on arbitrary social rules.”

“They’re not completely arbitrary. We can choose not to act on them, but they are based in our biology. Besides, it’s not like I’m saying you should play your part all the time. Just…more often than you do now. You don’t have to change a thing about yourself. I just want you to be aware that it happens. At the very least, all I can do is make you aware of it. That might do some good. And should I require your manly expertise, you’ll understand that I’m using your body, not your masculinity.”

“Sounds fun when you put it that way. You can use my body any time you want.”

“Actually, I was thinking how weird it feels to think about gender roles.”

“Why, because you’re a man? Hey, at least you have a role. The prescription’s already been filled, and it’s waiting at the next social encounter. There are those less fortunate than thee. Our transvestite and transsexual cousins really have to deal with that issue.”

“Among a few others.”

This assignment was to write a dialogue between two people without using identifying markers like, “he said,” and “said Kari.” Other than that, I don’t think there were any content requirements. My professors were good about that.