[vc_row][vc_column][vc_column_text css_animation=”fadeIn”]I’ve lived in multiple places, had a bunch of random jobs, received an education, and most of the other stuff you put on a résumé. But this timeline is focused on my path as a creative, highlighting the milestones that ultimately led you here.[/vc_column_text][/vc_column][/vc_row]
2022 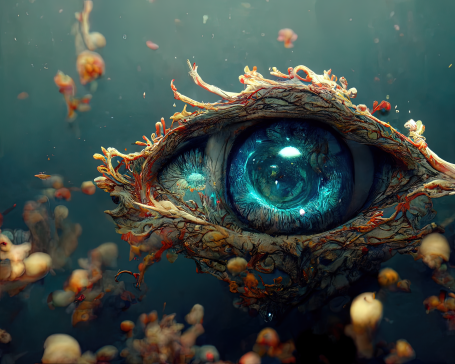 For the first time in decades, I made the decision to build myself a PC. But since my career revolves around powerful processing, and my hobbies include editing and gaming, I decided it was time to build my dream computer. It took more than two months to complete and will take months to finish paying off, but it was a labor of love that has provided me with the ultimate tool for digital creation.

I was originally hired as the Web Content Specialist because of my background in web development, but video production experience quickly grew to be more useful to the company. At the beginning of 2020, my title switched to Video Production Specialist and I became the in-house video producer and editor. 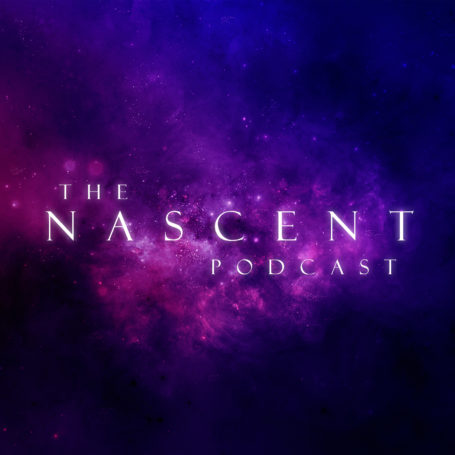 This project utilizes most of the skills and contacts I’ve built up over the past few decades. It is a serialized drama similar to the radio dramas of old. It started out as a vehicle for a short story I once wrote, but it will eventually incorporate other voice actors, writers, and artists.

This is the official music video for Mark Petrie’s “Trace of Gravity.” I was commissioned to create a video for his song using nothing but stock footage (on a limited budget). This was the result.

I’d never done serious video editing until I started working with Mediajuice Studios. Sure, I’ve tweaked a couple of things using iMovie and similar programs, but I hadn’t done real editing until it was required for the job. So, to learn the software and get into the video editor mindset, I began experimenting with Adobe Premiere Pro. I set a song to a video mostly on a whim, but it immediately became an obsession. I went from song to song, video to video, searching for things that worked together. A few of them (particularly this one) have gained a lot of attention, which has encouraged me to keep creating.

Unlocked: The World of Games, Revealed

I was fortunate enough to be a part of the Mediajuice Studios team that brought Jeremy Snead‘s new documentary series to life. It took us two years and tens of thousand of miles, but it is finally available to the public. As a lifelong gamer, it was clearly a thrill to be a part of something like this. We met some fascinating people and documented some truly captivating conversations. My roles included organizing the shoots, planning the travel, researching the topics, booking the interviewees, recording on-location audio, running one of the cameras, video editing, graphic editing, sound editing, scripting explainer videos, building the website, and prepping the booze. 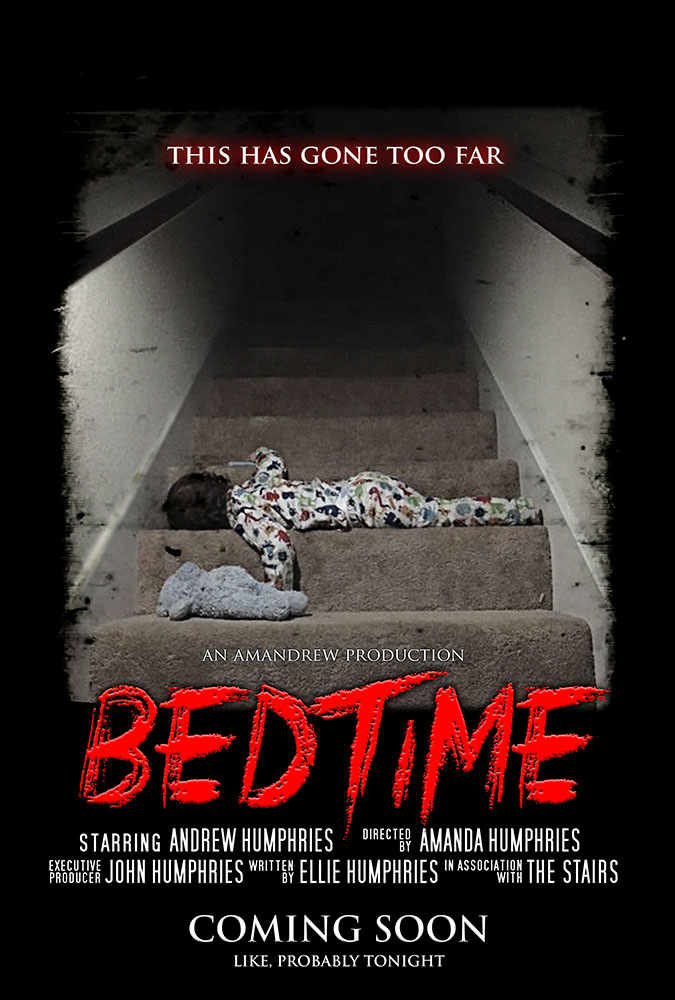 That Time I Went Viral

A friend of mine shared a picture of her son asleep on the stairs, and it was so amusing to me that I pumped it through Photoshop. It seemed too dark at first (because it looked like a horror film with dead child), so I started to add humor to it. The more I worked on it, the more amusing I found it. When it was done, I emailed to the parents of the kid. They posted it to Reddit, it soared to the top, and then it went truly viral. 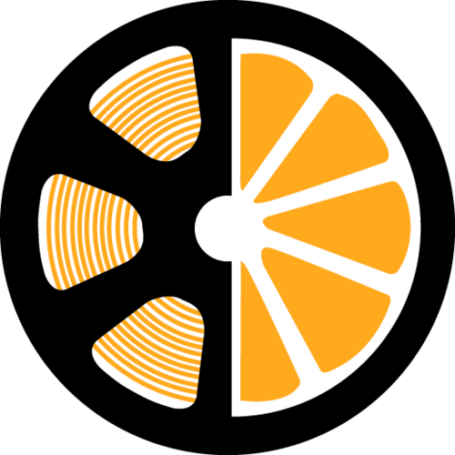 I did my first shoot with Mediajuice at Mouser Electronics, and Jeremy asked me to help him out with other projects after that. I divided my time between our upcoming television series and doing work for the studio itself. During that time I have become best friends with Adobe Creative Cloud, particularly Photoshop, Premiere Pro, and After Effects. But I have also been exploring the production side to multimedia, from organizing shoots to marketing the final products. 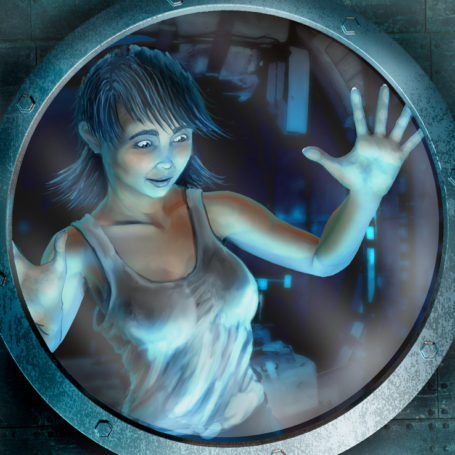 Heart of the System

This story came about one night when I was supposed to be writing something else. In a fit of inspiration, I wrote the majority of the story, which was about half of its current length. Then I left it alone for many years. I came back to it many years later and began building it back up. Now, it’s technically finished, but I haven’t completely abandoned it yet. 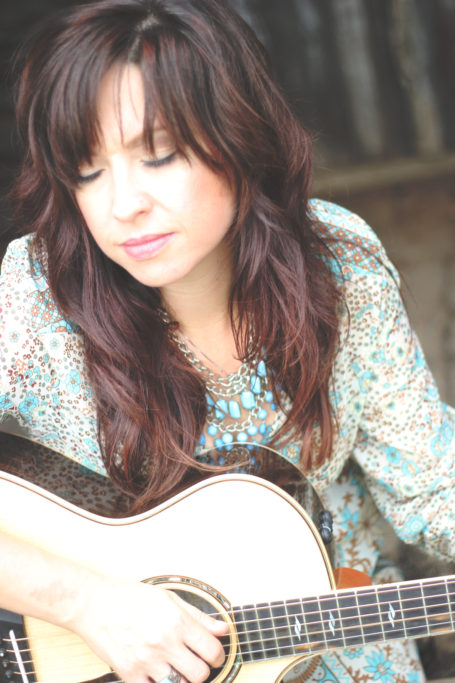 I remember when Jenni was a young woman performing acoustic sessions at coffee shops in front of groups that consisted of her friends and random people who happened to be there that night. Even then, her talent was undeniable. I offered to create a website for her because I knew she was worthy of publicity that her unpaying gigs could not afford. Since that time, I’ve seen her grow into a full-time musician, band leader, and masterful song writer. 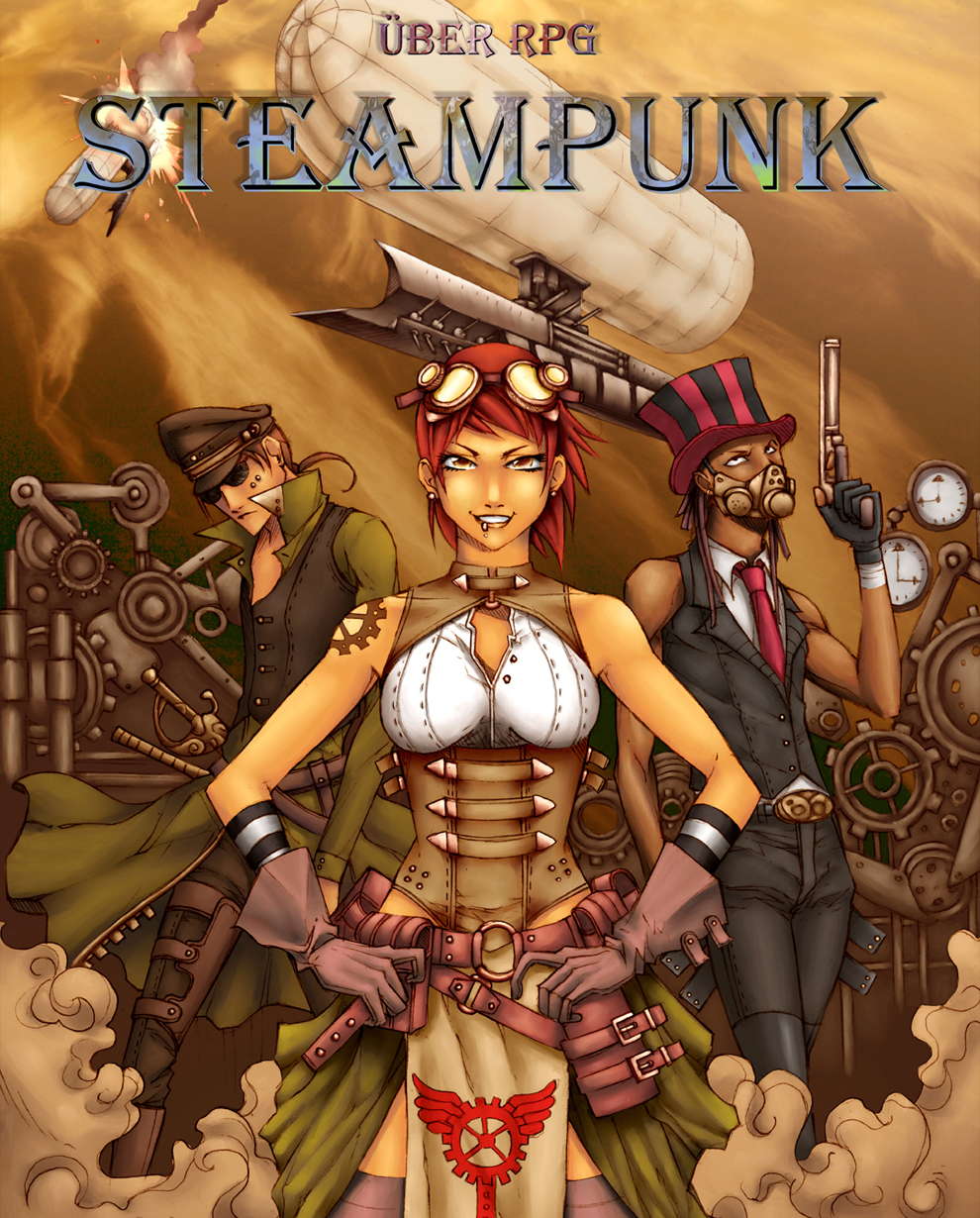 After toying with website design for years and landing a few paying gigs, I decided I would take advantage of my new hobby and make my business legal. But websites were just part of the job. I designed pamphlets, posters, fliers, logos, maintained social media, edited audio, mixed music, and several other digital services. I honed my Photoshop skills and learned (the hard way) how to manage dozens of websites simultaneously. 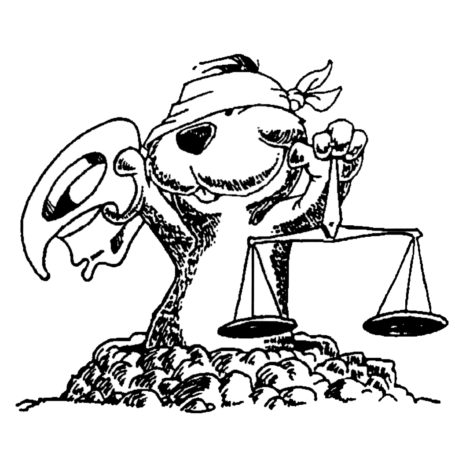 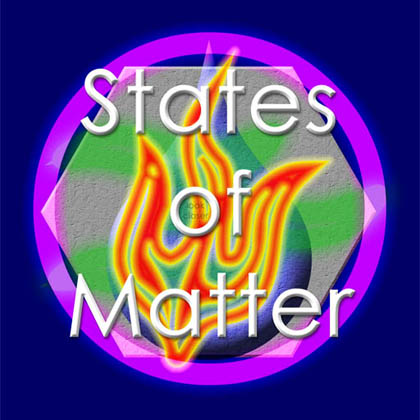 A Book in Five Parts

These stories were written as part of a semester-long project in my final creative writing class at Texas Tech University.

This is a collection of ten short stories that were intended to bemuse, berate, and bewilder. They include everything from the serious to the absurd, from events which are entirely possible to ideas that are barely comprehensible. All of them were written in 2003, and they are my first attempts at polished works of fiction. They are all products of my creative writing classes, so I’ve included an explanation of the assignments that led to each story. They have virtually nothing in common except that my brain pooped them out, so hopefully you’ll find something to keep you entertained.

This is an homage to powerful musical scores began more than a decade ago after I mixed a few of my favorite songs from movie soundtracks into a short compilation. I spent years working on it, applying my musical training with the program that eventually became Adobe Audition. It eventually took on a life of its own, and I have been working on it ever since. It’s a combination of dozens of songs, sound effects, and audio clips transformed into a single piece of music. It is a musical collage that is intended to be an experience just like watching a movie. 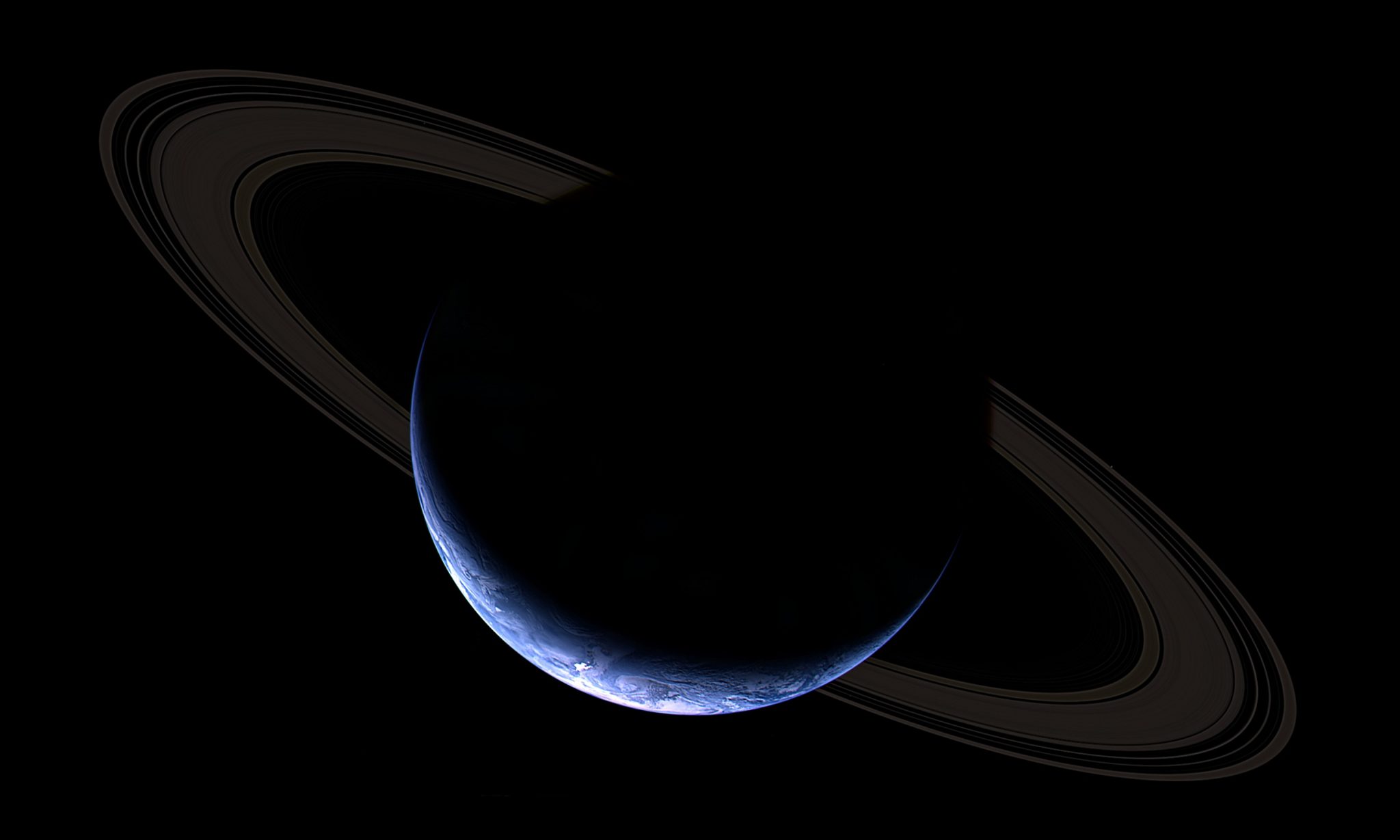 I wrote this story a very long time ago after I experienced it in a dream. Then a few years later, I picked it up and worked on it some more. I submitted it to a modest journal with an impressive-sounding name (The Next One Literary Journal sponsored by the Texas Tech University Honors College), and they accepted it. I didn’t make any money off of it, and it wasn’t a long-running journal, but I did get to experience the joy of seeing my words in print. 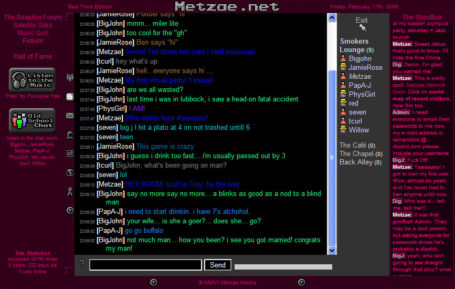 This began as a learning experience, grew into a hobby, and laid the groundwork for my professional skill set. The current version is much less intricate but it is more in tune with modern web standards. I try to keep the legacy version site online because I coded the entire thing by hand, but it’s so dependent on decade-old web standards. It’s a nice reminder of the fact that I learned most of what I know about HTML, CSS, and web standards through this project.

This picture is pretty unremarkable. It’s just a white cloud in a blue sky. But it is remarkable to me. That’s because it was the first picture I snapped with my first digital camera that felt like more than just a snapshot of my friends. I framed it up before I even knew what framing was and was struck by the starkness of it before I understood that was the reason the picture exists. After that, I started looking at the world from the perspective of a photographer. Tens of thousands of pictures later, making the transition to videographer was relatively painless. 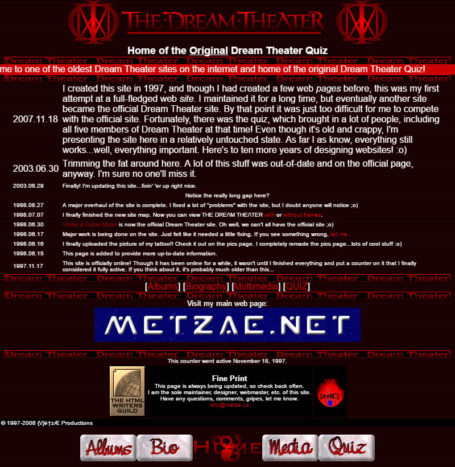 I remember the first time I right-clicked a website and realized what “view source code” meant. At the time, most websites were simple enough that you could pull almost any element from them, modify the code, and make it your own. So I started tinkering with HTML and built a few pages. I was a huge fan of the band Dream Theater, so of course, a geek like me would make a fan site and fill it with animated GIFs. It’s not a great website by any means, and only keep it for sentimental reasons.

As part of a project for a class that would probably be called AP Eccentricity, I composed a song for our high school concert band. The full title is “Awn Saum Bull: A Hymn for Her” (I was 16.) The band performed it at one of our concerts that year. No one seemed to hate it even though I was a total amateur. I learned a lot about music even though I’d been doing it for many years. It was a weird experience, but it was a valuable one. That was the first time I learned how to create something that complex, and I have flashbacks whenever I’m working on similar things to this day. 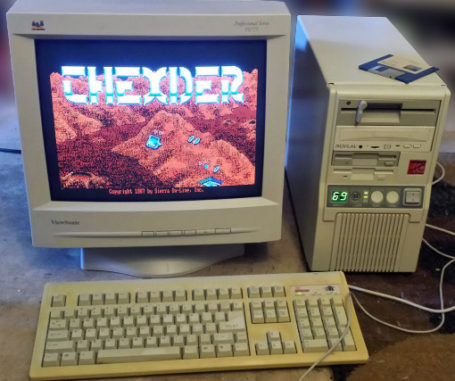 My father has always been a technophile, so I have always been around computers. The first computer I ever had that belonged specifically to me was an IBM clone with a 286 processor, extremely similar to the one pictured above. A personal and private computer has been a staple of my life ever since. They have always been more than just digital sandboxes and expensive solitaire machines. 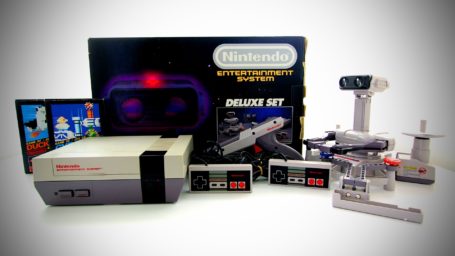 Like millions of other kids, this console marked the beginning of my lifetime obsession with video games. Though I’d grown up around them and had even tinkered with previous consoles, this was my first immersion into virtual worlds. If the stories were well-written and compelling, it became just as engaging as any other medium. And if they weren’t, I just filled in the gaps on my own. 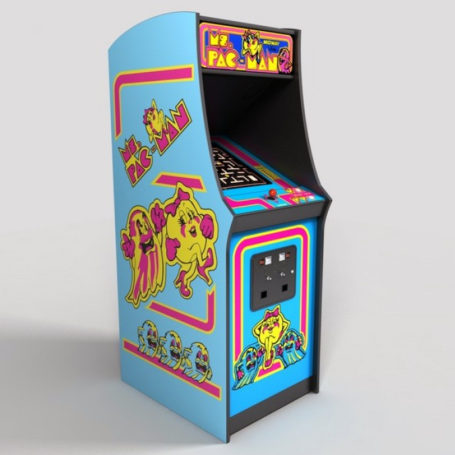 I have only the vaguest memory of the first five years of my life, but during that time my family owned the only arcade in our town. One of my first memories of video games was standing on a stool and playing Ms. Pac-Man.