There has been a lot of “debate” over what to do with all of the human beings and monsters locked away in Guantanamo Bay. There are apparently only two sides to this discussion: free them all and send them letters of apology or kill them all and let God sort them out. I’m obviously oversimplifying things, but you wouldn’t know it if you watched the 24-hour news channels. Like so many public discussions, the truth is often obscured by the rhetoric.

For every terror suspect we convict fairly, there are hundreds we detain unfairly. For every innocent person we keep incarcerated, we create dozens of potential enemies. And for every person (regardless of innocence or guilt) we treat unfairly or inhumanely, we create untold numbers of people who no longer see America as the shining beacon of freedom we so desperately claim to be. What other reasons do terrorists need to demonize us if we actively and regularly give them reasons? How can we dispute their claim that we are the Great Evil when our actions are so greatly evil?

Aside from keeping the worst of the worst locked safely away, the only thing that can change the anti-American sentiment that has been broiling over the past decade is a fresh and decent approach to our fellow citizens of the world. I do not include terrorists in this group, however. A terrorist loses their worldwide citizenship once they conspire to commit crimes against their fellow humans. But how, exactly, is that different than when we commit crimes against our fellow humans? An innocent person locked away in a dank cell is a crime of the highest order, and every person in the society that supports it shares the blame for it.

It used to be that the ends justified the means. Airplanes were used to murder 3,000 Americans? Let’s tighten airport security to the point where even children and the elderly are searched and detained. The Viet Cong are hiding among women and children in the jungle? Let’s firebomb the whole place to ensure we kill enough of the enemy. Japan attacks a military installation in the United States? Let’s put all people of Japanese descent into concentration camps. The South wants to secede from the union? Let’s go to war with them and kill hundreds of thousands of our fellow Americans. The native Americans won’t move out of the land we want? Let’s force them off or just slaughter them outright.

Throughout American history, we have justified our atrocities in the name of our ideals. But even when those ideals are righteous, it does not change the fact that we have committed atrocities. Deep down, every intelligent or thoughtful person knows this. That’s why we justify executing individuals who have committed murder. We know that we are killing someone to make the point that killing is wrong. And while most of us recognize how glaringly hypocritical it is, as a nation we continue to do it anyway. If there were no hypocrisy to our actions, it would need no justification.

Which leads me to former Vice President Dick Cheney. 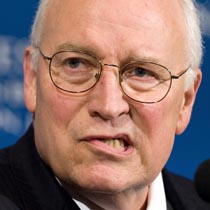 Immediately after President Obama’s speech that re-defined America’s stance on national security, not five minutes had passed before Cheney took his own stage in an attempt to give a rebuttal. His speech was a preemptive attack on his enemies, a tactic he is clearly comfortable with. In it’s own Karlrovian way, it displayed obvious hypocrisy wrapped in a package of carefully-worded propaganda. For example, after he mentioned 9/11 over a dozen times, he clearly stated that we should not focus on the past. Then he attempted to deflect criticism away from his administration and place the blame onto the current one, oblivious to the points Obama made just moments earlier about the numbers of political prisoners the Bush administration freed. He focused on inane and irrelevant details such as the term “abducted” and incorrectly characterized it as the Obama administration’s wording, all while using terms like “sadistic” to describe American interrogators who were acting under full authorization from the Bush administration. He continued to fuel the quasi-debate about how safe America would be if we allowed detainees to be held on American soil, completely ignoring the fact that we have held thousands of people in Federal maximum security prisons and no one has ever escaped from one. Perhaps worst of all, he took credit for the fact that we were not attacked while under his watch while failing to recognize that hundreds of attacks have occurred on American soldiers every year since we entered Iraq.

All of this got me thinking about why Cheney (who I do not believe cares about America as much as he would like us to think) is suddenly so vocal on this issue. He has been on a media blitz, employing his loyal servants, family members, and his own personal media outlet to repeat the same talking points as opposed to actual experts who understand the issue. Why, Dick? Well, his daughter accidentally let the truth slip: Cheney fears prosecution. And he should. One grand jury has already indicted him, and more people are calling for his indictment every day.

I am pleased with the new direction this nation appears to be heading concerning how we deal with terror suspects. If things go as planned, we will move these prisoners to our soil where they can be safely and legally monitored. President Obama’s speech in front of the Constitution was more of a poignant reminder of where we come from than an arrogant assumption about missions not-quite-accomplished. That speech is destined for the history books, but hopefully, it will be remembered as one of the great turning points in the American psyche. I hope it is the beginning of an era when we hold our leaders responsible for their actions, not excuse them because of their motives. Cheney is such a slippery weasel that I have no illusions about justice ever being served, but I would like to see us try at least. After all, when Bill Clinton shot someone in the face, it wasn’t with a shotgun, and we impeached him.

That is why I fully support the indictment and prosecution of former Vice President Dick Cheney.