Here’s a relatively simple answer: Global warming is caused by the greenhouse effect and the increase of anthropogenic (man-made) greenhouse gas concentrations.

And here’s a more complex answer: Look at Mars. It has lost most of its greenhouse gases, and now it’s oceans are gone and its surface is freezing. Now, look at Venus. It has a runaway greenhouse effect, and now it’s atmosphere is so dense that it rains diamonds and it is hot enough to melt metal. All three planets (ours included) formed in the same way at the same time, and their present atmospheres are the result of their pasts.

Now, don’t get me wrong, I don’t think we’ll end up like either of those planets. For one thing, Venus is closer to the sun, so it’s bound to have higher temperatures. But Venus is so hot because of the greenhouse effect, not just because it’s closer. As for Mars, it’s farther away and colder, but there is strong evidence that it had complete oceans that once covered its surface. Where did the oceans go? Do you think the atmosphere had anything to do with it? Both of these planets are strong warning signs (from the heavens, I might add) about what our planet’s atmosphere is capable of becoming.

And, something is happening. Take a peek at this: https://eric.metze.us/global-temperatures/

I understand taking statistics out of context can be a bad idea (because that graph only goes back a few decades rather than millions of years), but look at the years on the graph and then think about when the Industrial Revolution happened. Is it a coincidence or a correlation?

Or, lets say that we are NOT the cause of global warming. Then that frees us of the burden of having to correct it, right? Wrong. Even if we’re not the cause of it, it’s happening anyway. So, doesn’t it seem like a good idea to plan for the future? You know, get those millions (billions?) of people away from the coming tide changes, or strengthening our homes and buildings so they can survive the increasingly powerful storms, or learning how to deal with all the political unrest (like Darfur) caused by millions of migrating people who are in search of green fields, or, or, or…

The reason this whole discussion bothers me, and the reason I felt the need to talk about it, is because of the politically-motivated distractions caused by the leadership of the Democrats and the Republicans and the inexorably-corrupt media. So when someone wins an award that is supposed to raise global awareness for a cause everyone supports (i.e., a healthy environment to live in), it’s just terribly frustrating that we have to stagnate in a sea of emotion-driven, counter-productive, intentionally-divisive conversations.

I recently got into another discussion about global warming, and the person I was talking to said they weren’t convinced that humans were the cause of it. Though it’s just foolish to think that the temperature isn’t rising, there is (admittedly) room for debate on how much our presence and actions are affecting the environment. So, I started compiling information into a chart.

If you have updated information or know where I can get this information, please let me know. I am planning on making the above chart much larger so that people can see the information and decide for themselves.

Feel free to bookmark this page and come back to it later (or reference it). I am going to update it as much as I can, and this will be the permanent home for it. 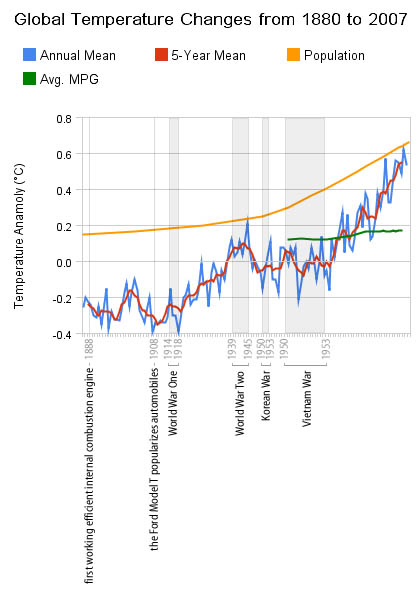